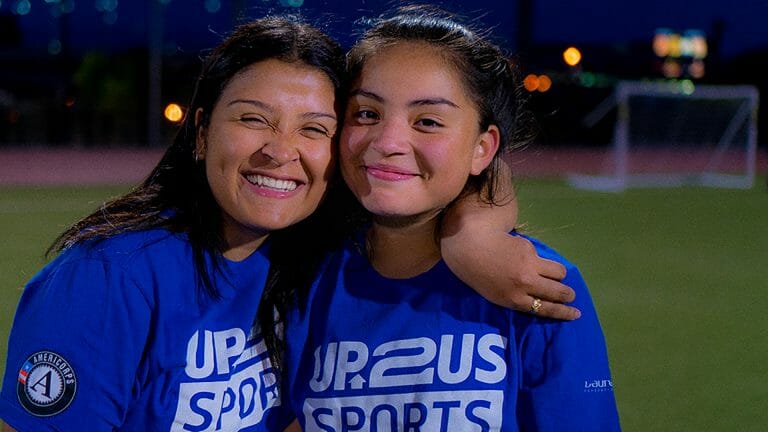 Monumental Sports & Entertainment has announced Up2Us Sports – a nonprofit providing game-changing solutions by putting sports in the hands of highly-trained coaches – will be its community partner in October as the organization shines a light on youth sports all month long and officially kicks off a new social impact program.

Up2Us Sports is the nationwide leader in engaging, training and supporting sports coaches to serve as mentors and role models to youth living in some of America’s most underserved communities. Up2Us Sports has trained more than 20,000 coaches and program staff and invested more than 1.5 million hours of service in youth sports programs across the nation while serving more than 495,000 youth. Monumental Sports & Entertainment Foundation has been supporting Up2Us Sports since 2015, providing nearly $70,000 in grants to support their efforts across all sports in the local area, including funding coaches at Fort Dupont Ice Arena in Washington, D.C.

“Every adult who had a great coach remembers that coach as a mentor who taught them success on and off the court. We believe all children in the D.C. metro area deserve this kind of coach. That’s our mission at Up2Us Sports, and that’s what the Monumental Sports & Entertainment Foundation is making possible through their groundbreaking support of our program,” Paul Caccamo, Founder and CEO of Up2Us Sports, said. “Being Monumental’s inaugural charity partner will help us to expand our work so that more kids accelerate in sports and in life. This is the kind of positive change that is possible when the hometown teams truly care about home, and the families and fans who live there.”

During the month of October, Monumental will encourage players, employees and fans to participate in the Up2Us Sports #ThanksCoach social media campaign across its myriad of platforms both online and in-arena. Additionally, proceeds from the 50/50 raffle at Wizards and Capitals games, “Round up at the Register” at the Team Store at Capital One Arena, and a monthly grant by the MSE Foundation will benefit Up2Us Sports. Fans can also click here to make a direct donation.

“We have enjoyed a terrific relationship with Up2Us Sports for five years and are thrilled to expand our partnership as we kick off this exciting new social impact program for our organization,” Monica Dixon, Executive Vice President and Chief of Staff at Monumental Sports & Entertainment, said. “At Monumental, we are committed to raising the game for our community and share in Up2Us Sports’ mission of empowering and transforming youth in underserved communities through a love of sports.”

Monumental announced its new social impact program in mid-September which will shine the spotlight on a different issue area and a corresponding nonprofit partner working to better the community by lifting up and amplifying the stories of these impactful organizations, regularly engaging through service and grants, and making ongoing business investments that strengthen the region with a centralized focus on kids, heroes, and community. Monthly themes include youth sports, military, season of giving, child health, community service, black history month, mentorship, first responders, sustainability, education, women’s health and equality and inclusion. In addition to a monthly grant to each organization made by the MSE Foundation, Monumental employees, players and fans will get involved in new ways by engaging in volunteer activities, amplifying key messages, learning about community change agents and through time and monetary donations. Fans will have multiple opportunities monthly, both in game and online, to show their support of each partner.

Established in 2010, Up2Us Sports is the nationwide leader in engaging, training and supporting sports coaches to transform youth, programs and communities. Their AmeriCorps coaching program is the first national service program that challenges young adults to give back to their communities through a year of service as coach-mentors. Up2Us Sports’ research, training and on-the-ground initiatives empower sports programs across the country to become a united force for meaningful change. To date, Up2Us Sports has reached nearly 500,000 youth by placing more than 2,600 coaches in underserved urban communities.