Monumental Sports & Entertainment Partnered with HeadCount to Drive Over 3,000 Civic Actions and Registered Hundreds to Vote This Election Cycle

The Washington Capitals, Wizards, Mystics’ athletes and teams lead the effort to engage all fans to use their power of the vote – and will continue the work for the 2023 off-year election cycle 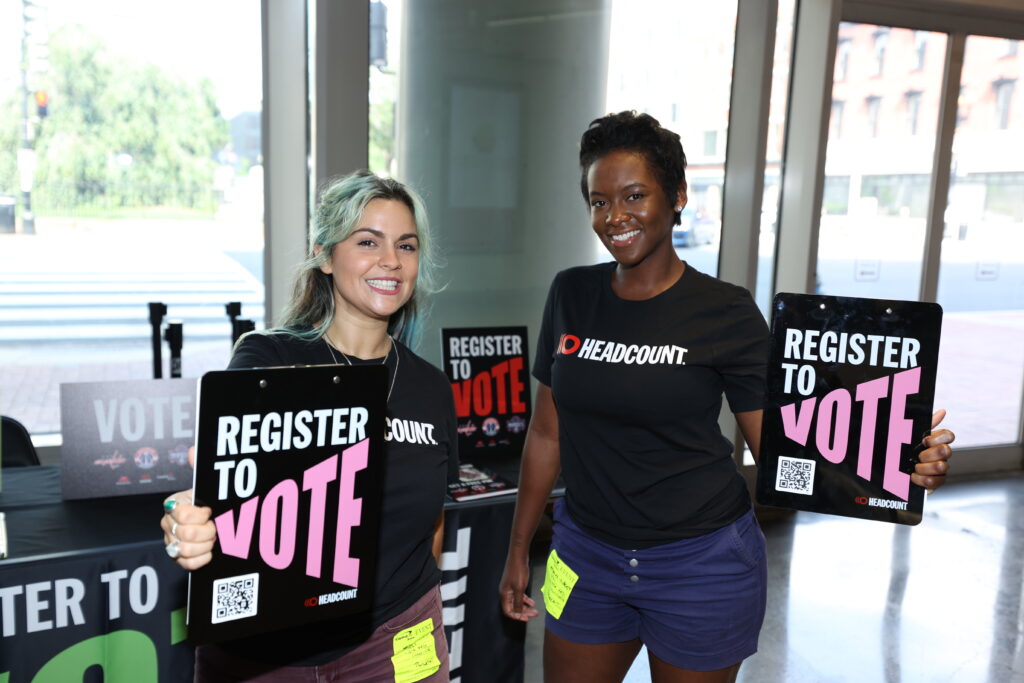 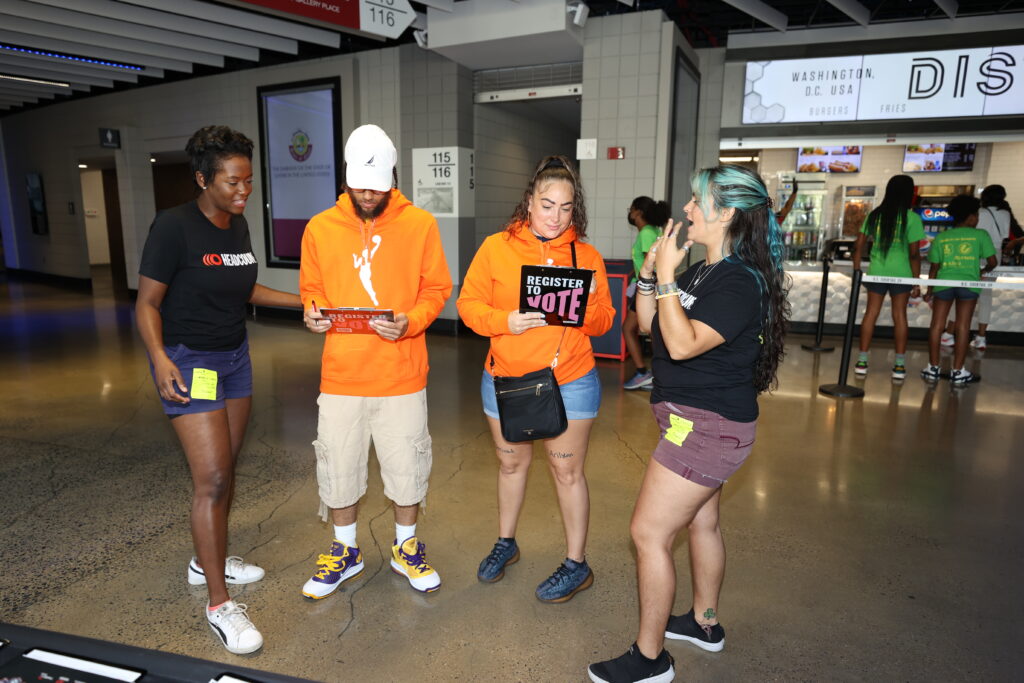 Washington, D.C.  – Monumental Sports & Entertainment (MSE) and HeadCount, the nonpartisan, nonprofit voter registration organization, today announced exciting results from the first phase of their collaboration to get sports and entertainment fans registered to vote and take civic action. With tens of thousands engaged through 40+ events (beginning with the New Kids on the Block concert on July 23, 2022, through the Washington Capitals vs. Edmonton Oilers game on November 7th), the partnership net more than 3,000 individual civic actions, which included checking voter registration status, finding polling locations, tracking ballot submissions, contacting lawmakers, and registering to vote. In all, hundreds were registered to vote because of this work.

Monumental Sports & Entertainment – and its professional sports team franchises, the Washington Capitals, Wizards and Mystics – launched this engagement to utilize their platforms to remind fans of sports, teams, and athletes that it is their right to engage in civic activity: register to vote, become educated on the issues and cast a ballot for each election within their jurisdiction. In total, HeadCount registered over 200,000 voters in advance of the midterms, and Monumental Sports & Entertainment was a critical partner in engaging sports fans this election cycle.

“We made this investment because of the leadership shown by the athletes and the teams – but our collective commitment runs far deeper,” said Monica Dixon, President, External Affairs & Chief Administrative Officer. “This isn’t just about the 2022 federal and local elections. There are races next year in 2023 which affect local communities across our fan base. The entire Virginia House of Delegates, Virginia State Senate, and many municipality elections are upcoming in cities and counties of Northern Virginia, in addition to the mayoral seats in Richmond, VA and Baltimore, MD. These local lawmakers have so much more impact on day-to-day life and so we remain committed to spreading the important message that we must vote in every election and every year and every issue to ensure our values are consistently represented by our elected leaders.”

The voting initiative continues throughout the remainder of the 2022-23 Wizards and Capitals season and will also include the home games of the 2023 Mystics season. In sum, the partnership is expected to drive civic action at more than 150 games, concerts and events for hundreds of new voters actively participating in our democracy.

“HeadCount is so excited by the success of our partnership with Monumental Sports & Entertainment, who continue to wholeheartedly support our mission by promoting voter registration and civic engagement across each of their separate teams and brands,” said Whitt Bell, Director of Partnerships & Events, HeadCount. “We are thrilled to be partnered together for the entire Capitals, Wizards and Mystics seasons, continuing to register and engage voters through the midterm and local elections, and directly contributing to HeadCount’s 200,000+ total voter registrations in 2022. We eagerly welcome the opportunity to bring sports fans into the HeadCount orbit, thus expanding our impact with voters from all teams and backgrounds.”

HeadCount was a partner of the National Hockey League (NHL) during their 2022 All-Star game. The National Basketball Association (NBA) announced earlier in 2022 that all 30 teams would play games on November 7th to drive a focused message of driving voter turnout and then have November 8th off to reinforce the importance of voting. The Mystics, though in the WNBA offseason, have held voter registration drives at their community events and used their social media platforms to remind fans of the importance of voting. Mystics players Elizabeth Williams and Alysha Clark recently volunteered at the HeadCount voter registration table at a Wizards home game at Capital One Arena ahead of the midterm election.

“Capital One proudly supports Monumental Sports’ efforts encouraging fans to register to vote. In 2020, Capital One and Monumental Sports & Entertainment partnered to open Capital One Arena as an Early Vote Location and Election Day Super Center as part of the District of Columbia Board of Elections’ (DCBOE) “Vote Safe DC” campaign. This year, Capital One and Monumental sought to continue the momentum. Capital One applauds Monumental’s partnership with HeadCount, the nonpartisan, nonprofit voter registration organization, to encourage sports and entertainment fans to register to vote. Capital One was proud to expand its partnerships with Civic Alliance, Time to Vote and Employee Voter Registration Week to ensure that every citizen can exercise this important right,” said Andy Navarrete, Executive Vice President, Head of External Affairs at Capital One.

During the 2020 election cycle, Capital One Arena served as an early voting location, a ballot drop-off location and an in person, Election Day voting site. The Entertainment & Sports Arena, a partnership between MSE, D.C. Government and Events DC, also served in the same capacity. Nearly 4,500 people voted in-person at Capital One Arena and Entertainment & Sports Arena during Early Voting and on Election Day – with thousands more who used the secure drop boxes at both arenas.

Additionally, Monumental Sports, the Capitals, Wizards and Mystics executed a robust voter education effort including a kick-off press conference and consistent media pitching/coverage, a dedicated voter information page on team websites, consistent social media pushes across all their platforms, in-arena and on-broadcast mentions, recordings from athletes and team officials on the importance of voting, and a collaboration with other Washington D.C. sports teams on a mailed flier to all D.C. households as well as an in-person voter registration drive in Ward 8, across from Entertainment & Sports Arena. The direct and indirect net of the efforts was measured in the thousands of additionally registered voters.

About HeadCount
HeadCount is a non-partisan non-profit organization that harnesses the power of music, culture and digital media to register voters and inspire participation in democracy. Since 2004, we’ve registered over one million voters through our work with musicians like Ariana Grande, Camila Cabello, Dave Matthews Band, JAY-Z and Dead & Company, and brands like Spotify, Ben & Jerry’s and GrubHub. Our award-winning online campaigns have been seen over a billion times, while our 50,000 volunteers can be seen at more than 1,500 live events each year. We reach young people where they already are – at concerts and online – to inform and empower.