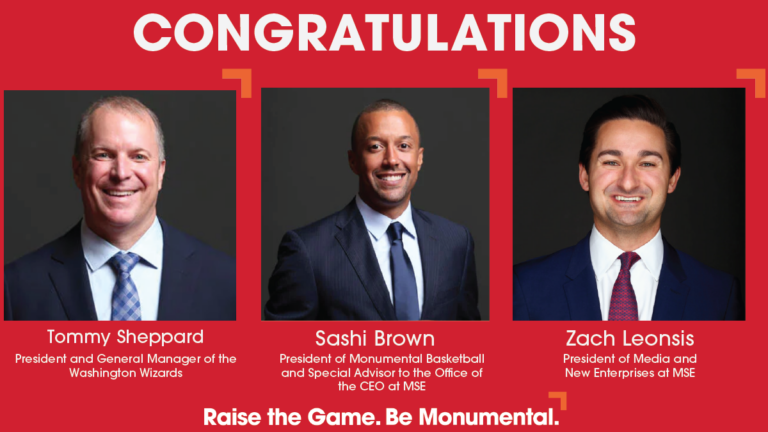 Tommy Sheppard extends contract and becomes President and General Manager of the Washington Wizards, Sashi Brown named President of Monumental Basketball and Special Advisor to the Office of the CEO, and Zach Leonsis promoted to President of Media & New Enterprises

“These elevations place deeper focus and executive attention on two of the top growth areas for our company — the NBA’s Washington Wizards and our work in traditional and new digital media,” said Ted Leonsis. “In streamlining the organization and acknowledging those whose incredible work has already propelled us forward, we know we can achieve even more and faster for the benefit of our fans and community.”

The promotions signal the company’s extended commitment to remaining an innovative leader across its platform of services in media, new investment vehicles, revenue generation models and building championship programs.

Tommy Sheppard – President and General Manager of the Washington Wizards

Tommy Sheppard has extended his contract and has been promoted to President and General Manager of the Washington Wizards. Sheppard has nearly completely revamped the team over the last three seasons, using data-driven decisions and placing an emphasis on character and development to acquire numerous young players while also bringing in winning veterans to play alongside franchise cornerstone Bradley Beal. Since Sheppard was named general manager in 209, the Wizards have shown continued improvement every season. The team made the playoffs last season for the first time since 2018 and currently sits at 10-3, their best start since the 1974-75 season.

Tommy is responsible for all basketball decisions for the NBA’s Washington Wizards and the G League’s Capital City Go-Go and the NBA 2K League’s Wizards District Gaming. Sheppard has nearly completely revamped the team over the last three seasons, using data-driven decisions and placing an emphasis on character and development to acquire numerous young players while also bringing in winning veterans to play alongside franchise cornerstone Bradley Beal. Tommy represents the Wizards at the NBA General Managers meetings, oversees the draft, makes all trades and free agent signings and is also responsible for player development and the Wizards’ work at the NBA Summer League and with NBA Africa.

Sashi Brown – President of Monumental Basketball & Special Advisor to the Office of the CEO
Sashi Brown has also extended his contract and has become President of Monumental Basketball and Special Advisor to the Office of the CEO. He retains oversight of Monumental Basketball – the umbrella structure of shared operational and athlete services catering to the NBA’s Washington Wizards, the WNBA’s Washington Mystics, the G League’s Capital City Go-Go and the NBA 2K League’s Wizards District Gaming. In this work, Sashi oversees research and information systems, technology, equipment, team communications, finance, facilities, security, and player engagement and will also oversee Monumental Sports & Entertainment’s venue operations.


As Special Advisor to the Office of the CEO, Sashi will oversee MSE’s venues operations— including Capital One Arena, which MSE owns and operates, and the three additional venues which MSE operates: EagleBank Arena on the campus of George Mason University, MedStar Capitals Iceplex where the NHL’s Washington Capitals practice, and MedStar Health Performance Center, where the Wizards, Mystics and Capital City Go-Go practice. He will also lead cross company teams on studies and provide recommendations for platform and infrastructure modernizations as MSE continues to innovate for the next generation of fans and integrate the latest technologies.

Zach Leonsis – President of Media & New Enterprises
Zach is a pioneering leader in designing and launching direct-to-consumer products and services, most notably the streaming product Monumental Sports Network which he created as a first-of-its-kind DTC platform for local sports in 2016. MSE media revenues – both national and local – are a crucial revenue stream and Zach’s keen awareness of the media landscape and dynamics have guided MSE in working closely with partners, Leagues, and distributors to consistently deliver excellence and grow MSE’s overall media ecosystem. Zach leads the MSE team in the regional sports network partnership with NBC Sports Washington and Comcast and will continue his service on the NBCSW board representing MSE’s minority equity interest. He will also retain responsibilities advising MSE’s CEO on League-level work regarding linear media and digital distribution, as well as with new innovations including blockchain, sports betting, and esports.

Zach will expand his work launching and incubating new businesses that leverage MSE’s core properties, investing in new high-growth companies that create value for MSE, and conducting due diligence on larger merger-and-acquisition targets to accelerate MSE’s goal of eclipsing $1B in total annual revenues. He will spend additional time focusing on esports and expanding MSE’s platform locally and abroad, adding to his current endeavors with MSE’s NBA 2K League team, the back-to-back championship winning Wizards District Gaming, and on the NBA 2K League’s Executive Committee. Zach will also continue to oversee MSE’s investment in Team Liquid, the most successful esports team in the world valued at over $300 million and will continue to serve on the Team Liquid board of directors. Additionally, he oversees MSE’s investments in companies including Epic Games, makers of Fortnite, and in Nifty Games and Niantic among other investments through MSE’s investment in the parent company, aXiomatic. And Zach will continue to showcase MSE’s depth of work through the annual Sports Capital Symposium, which he created in partnership with SportTechie, convening thousands of sports industry elites in thought leadership sessions each fall.

About Monumental Sports & Entertainment:
Monumental Sports & Entertainment is America’s leading sports and entertainment family. Our people, players, teams and events bring excitement and joy to millions. We invest and innovate to consistently raise the game so we can deliver extraordinary experiences that will inspire and unite our community, our fans and our people. To learn more, please visit www.monumentalsports.com.