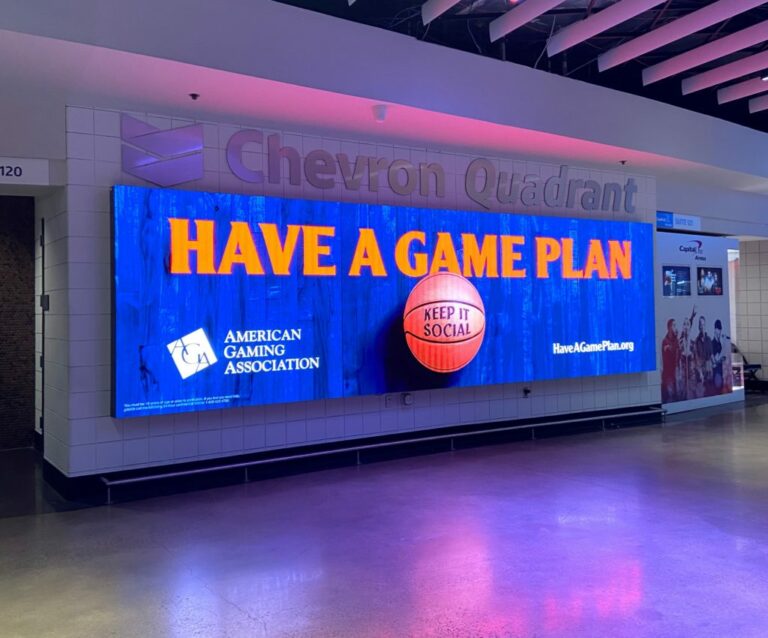 MSE has worked with the AGA for nearly five years on a pragmatic approach to gaming and was an inaugural partner of the Have A Game Plan.® Bet Responsibly.™ Program

Washington, D.C. – Monumental Sports & Entertainment (MSE) has been partnering with the American Gaming Association (AGA) for nearly five years on a responsible, pragmatic approach to legalized sports betting. Their work together first began as partners in the successful overturn of PASPA (the Professional and Amateur Sports Protection Act) – a campaign which began in 2017 and continued through the final Supreme Court decision in 2018. Over the subsequent years, they worked with local regulatory bodies on developing the framework for reporting and oversight and with the National Basketball Association (NBA) and National Hockey Association (NHL) on the rules around maintaining integrity and transparency. In July 2020, the pair reached a milestone moment when the first ever in-arena sports bet in the U.S. was placed at Capital One Arena – through a partnership MSE secured with William Hill (now Caesars Entertainment), serving as the sports betting operator.

Throughout the partnership, the AGA and MSE have developed and designed ways to ensure fans remain educated and equipped with tools to enjoy gaming in a responsible manner. It’s why MSE joined as an inaugural member of the joint initiative to broadly promote responsible sports wagering through the Have A Game Plan.® Bet Responsibly.™ campaign, and continues its robust execution of tactics.

The Have A Game Plan campaign focuses on educating sports fans about the core principles of responsible sports betting: setting a budget and sticking to it, keeping betting social, knowing the odds, and playing with trusted, regulated operators. Visual campaign reminders are displayed throughout the concourse at Capital One Arena, home to the Washington Capitals and Wizards, which are all owned by MSE.

Additional assets and resources Monumental Sports & Entertainment has dedicated to promoting responsible gaming include consistent media coverage on MSE’s efforts, organic and amplified social media posts across all MSE social channels and in-arena digital displays and commercials to consistently message fans outside the arena, on concourses, near concession areas, and in the center hung and ribbon boards while fans are in their seats.

Social Media: Across MSE’s Twitter, Facebook, Instagram, and LinkedIn pages – which have nearly 50,000 followers – MSE has a consistent cadence of posts to remind fans of the AGA partnership, the importance of gaming responsibly and resources where they can learn more information. Additionally, MSE’s teams, the Washington Capitals, Wizards and Mystics, also amplify that work to their social media audience of over 10 million followers. MSE takes advantage of the natural earned media cycle around efforts like Responsible Gaming Education Week to post across channels, as well as posting when MSE executives are speaking at conferences about responsible gaming, or when MSE is announcing new partnership deals in the sports betting space.

In-Arena Signage: The in-arena digital displays broadcasting responsible gaming across Capital One Arena are truly impressive. From the 100 Level to the 400 Level, from privacy screens in the Suites to the overhead angled signs in the bowl, from the exclusive lounges to the out-of-home boards on the external edifice of Capital One Arena – there are unprecedented minutes of responsible gaming messaging across every screen within the arena. 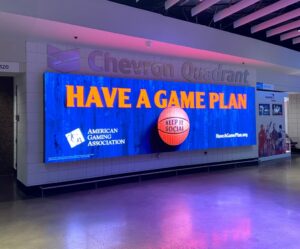 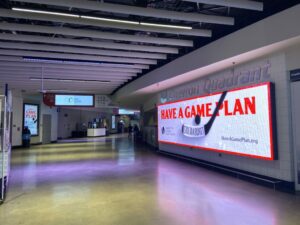 In-Arena Commercials: There are also overlapping minutes for in-arena commercials – on top of the in-arena signage. Throughout the Washington Capitals and Wizards pre-season, regular season and post-season, as well as Georgetown University’s Men’s Basketball games and select concerts and events at Capital One Arena, MSE’s Arena Television Network broadcasts more than a dozen thirty second ads per event.

Those ads began running in the second half of the 2017-18 season leading up to sports betting becoming legalized. During the 2018-19 season, the pivot to responsible gaming came swiftly as the PASPA regulation was overturned in early 2018. During the 2019-20 season, AGA formally launched their campaign, and MSE stood as their inaugural partner in that effort and designed messaging for all the digital boards and the Arena Television Network across Capital One Arena.

Within each new asset created – such as a newly-launched sports betting show which is produced and broadcast from the sports book at Capital One Arena – there are unique ads to remind fans to bet responsibly. These ads run at least once an hour and appeal to basketball and hockey fans alike.

WASHINGTON, D.C. – Monumental Sports & Entertainment announced a continuation of the partnership with 15 Seconds of Fame® (“15SOF®”), the award-winning mobile app and media platform that delivers users their…