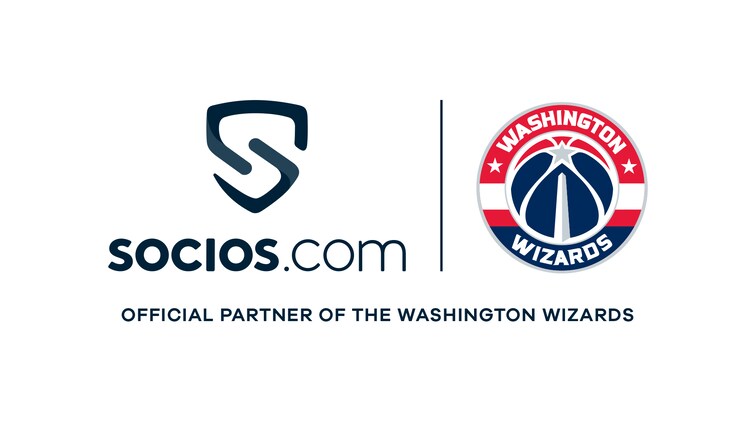 WASHINGTON, D.C., 23RD SEPTEMBER 2021: The Washington Wizards are proud to announce a new official team partnership with Socios.com, the leading global blockchain provider for the sports and entertainment industry.

Socios.com is a direct-to-consumer (D2C) platform that leverages blockchain technology to provide the world’s leading sporting organizations with the tools to engage with and monetize their global fanbases.

The partnership is part of Socios.com’s growing expansion into the US sports industry, with the Wizards becoming the 12th NBA franchise to partner with Socios.com.

As an official partner, Socios.com will have TV-visible arena signage during Wizards’ home games and a presence on the Wizards’ official website and social media accounts, including monthly fan Twitter polls and custom-branded content.

Socios.com has major global expansion plans and will increase their existing presence in Europe, while targeting many more Fan Token launches in the USA, Asia and South America with the world’s leading sporting properties. Socios.com has multiple office locations around the world and has already opened new regional headquarters in Madrid, Istanbul, São Paulo and Buenos Aires in 2021. The company will open a new office in North America in the near future.

Alexandre Dreyfus, CEO of Socios.com and Chiliz, added: “We’re really excited to welcome the Wizards to the Socios.com roster and look forward to working with them to increase fan engagement and reward fans across the world in the years to come.”

Transitioning passive fans into active fans is essential to the future of sport. Our vision is for an extensive network of the world’s leading sporting organizations to achieve this through Fan Tokens and transactional fan engagement on Socios.com. Fan Tokens, collectible, digital assets minted on the Chiliz blockchain, and the Socios.com fan engagement platform enable the world’s biggest sporting properties to plug into a fan influence and fan reward ecosystem. Socios.com has already generated $150M in revenues for sports teams in 2021. Over 50 major sporting organisations, including UFC® , FC Barcelona, Juventus, Inter Milan, AC Milan, Paris Saint-Germain, Valencia CF, Atletico Madrid, Arsenal, Manchester City and the Argentina and Portugal national teams have partnered with Socios.com. Aston Martin Cognizant and Alfa Romeo Racing ORLEN of  Formula One™ have launched Fan Tokens. Leading esports organizations Team Heretics, NAVI, OG and Alliance have all launched Fan Tokens on the platform. More than 10 major NBA organisations have joined the Socios.com roster. Three leading IPL sides have also joined the Socios.com roster. Many more leading sports and entertainment properties from around the world are set to launch Fan Tokens in the near future.  Chiliz, the crypto unicorn behind the Socios.com platform  has 150+ employees and has already opened new regional headquarters in Madrid, Istanbul and São Paulo. The company will open a new office in North America in the near future. Chiliz $CHZ has been listed on a host of major cryptocurrency exchanges around the world, including Coinbase and Binance.  Socios.com – creators of Fan Tokens – also own www.fantokens.com which will launch soon. The Socios.com app is available in 10 languages. For more information please visit www.socios.com.

About the Washington Wizards

The NBA’s Washington Wizards have been a mainstay in the metropolitan area for nearly 50 years.  Since 1973, the franchise has totaled 31 playoff appearances, eight division titles, four trips to the NBA Finals and a championship in 1978. Prior to making Washington D.C. home, the franchise played in Chicago and Baltimore. Seventeen Naismith Memorial Basketball Hall of Famers played at least a portion of their NBA careers with the organization and five players have had their jersey numbers retired. Since 2019, the Wizards have operated as part of Monumental Basketball, an organizational collective formed within Monumental Sports & Entertainment, the parent company which also owns the Washington Mystics (WNBA), Capital City Go-Go (NBA G League) and Wizards District Gaming (NBA 2K League).