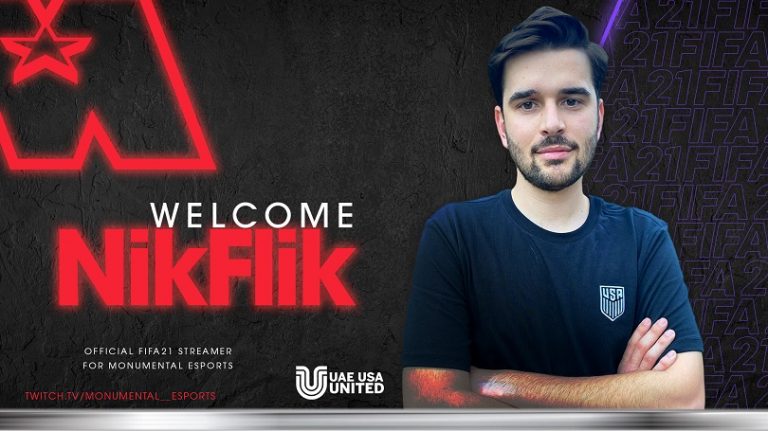 Washington, D.C. – Monumental Sports & Entertainment today announced the launch of its Monumental Esports Twitch channel with founding partner, the Embassy of the United Arab Emirates in Washington, D.C. The new channel will be presented by UAE-USA United, an Embassy initiative to foster and promote cultural connections between the two nations, and will feature 10 hours of specialty streaming each week with FIFA competitor and streamer, Nick “NikFlik” D’Addario. The programming will also include two additional hours each week for guest streamers and specialty programming – such as simulcasts of esports events from Abu Dhabi and Dubai in the UAE.

The Twitch channel may be found at: http://twitch.tv/monumental__esports

“Monumental Sports & Entertainment has been at the vanguard of esports investment and development and the announcement of our first dedicated streaming Twitch channel focusing on traditional sports video games with a marquee FIFA player, NikFlik, is a natural evolution of our tremendous work,” said Monumental Sports & Entertainment Director of Esports Andrew McNeill. “We couldn’t be prouder of our ongoing partnership with the Embassy of the United Arab Emirates, who joins us as a founding partner in this effort. We share a vision and passion for gaming and understand that the cultural diplomacy we are building together will harness the energy and creativity of the global esports community.”

This latest collaboration between the UAE and MSE follows UAE-USA United support for the 2020 seasons of MSE’s Wizards District Gaming and Caps Gaming. The UAE is a rapidly growing hub for esports in the Middle East and beyond. With two-thirds of the region’s population under 30, excitement about tech, sports and entertainment is on the rise, particularly among women. The UAE’s culture of innovation, along with serious investments in gaming infrastructure development make it a prime partner for this new initiative.

The Monumental Esports Twitch channel will feature gameplay from a variety of competitive titles with an emphasis on traditional sports video games, including EA Sports FIFA. Additional gameplay will be provided at launch by esports athletes from the University of North America. Further titles and streamers will be added in the near future.

A native of the Baltimore area and local to the DMV, NikFlik has been playing EA Sports FIFA regularly since 2002. He is currently the 59th ranked player in North America in FIFA 21’s Xbox division. NikFlik’s addition marks Monumental’s first foray into competitive FIFA esports.

“I’m extremely excited to join Monumental Esports,” said NikFlik. “As their first FIFA Esports player, I can’t wait to help provide unique content and high-level gameplay on the Monumental Esports Twitch channel. Together, I know that we can build a brand that is a leader in esports streaming as well as a force to be reckoned with in the competitive FIFA scene.”

With an open, progressive vision for the Middle East, the United Arab Emirates is a close friend and a strong ally of the United States. This partnership is built on ideals of inclusion, prosperity and peace. For more than a decade, the UAE has been the largest American export market in the Middle East, supporting hundreds of thousands of American jobs and facilitating bilateral investment. The UAE has also forged strong ties with cultural, medical and philanthropic institutions in the US to help enrich and improve the lives of people in both countries and around the globe. To learn more, please visit www.uaeusaunited.com.