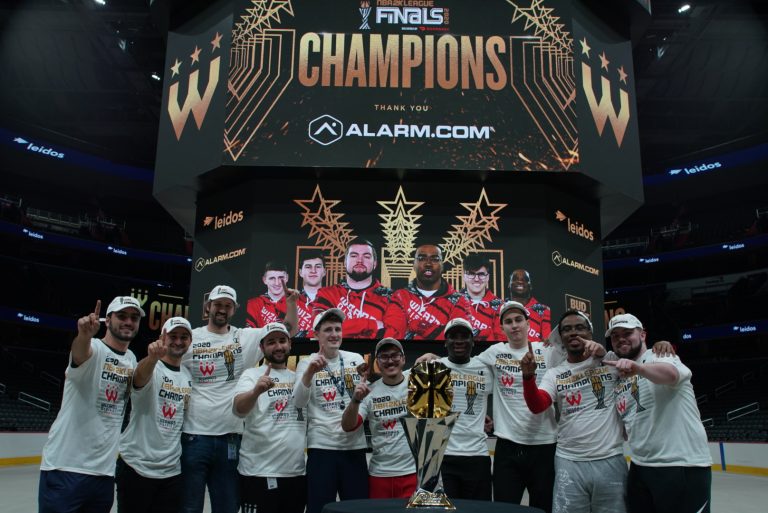 Washington, D.C. – (August 28, 2020) – Wizards District Gaming was crowned 2020 NBA 2K League Champions after defeating Warriors Gaming Squad in Game 4 of a best-of-five game series by a score of 70-55. This was the first ever championship win for Wizards District Gaming, one of the inaugural teams in the league when it launched in 2018. The franchise, owned by Monumental Sports & Entertainment, is the NBA 2K League affiliate of the Washington Wizards.

“In a year where sports teams across all leagues had to deal with unique circumstances – the acute health concerns of the global COVID-19 pandemic, the broader uncertainty caused in its wake, and the continued fights for social justice taking hold of our hearts and minds – our players have not been immune,” said Zach Leonsis, Senior Vice President of Strategic Initiatives for Monumental Sports & Entertainment and General Manager of Monumental Sports Network. “They channeled their energy to focus on competing in the game that they love, leaned on each other as brothers and teammates and pushed one another towards this incredible achievement. On behalf of Monumental Sports & Entertainment, I could not be prouder of this group of talented players who have exhibited excellence not only in their play but by conducting themselves with such maturity and professionalism throughout this entire season.”

The best of 5 game series, which tipped off around 7:45 p.m. ET on Friday, August 28, 2020, ran just under four hours and was packed with high-level emotion, dramatic match-ups and relentless focus from the entire team. In Game 1, Wizards District Gaming fell 53-65. In Game 2, they ground out a win, up by only a point at the half but dominating in the second half and ultimately winning by 60-50. In the third game, on the road, Wizards District Gaming fought out a win, 64 to 59. By Game 4 the evenly match teams, were both ready for a fight. Down by 2 at the half, Wizards District Gaming overtook the Warriors Gaming Squad with a final score of 70-55 to win the championship.

“Bringing the trophy back for the fans who have shown us such loyalty and support is so rewarding,” said Andrew McNeill, Director of Esports for Monumental Sports & Entertainment. “We owe such a debt to them – so many of whom have been with us since the beginning as well as those who contributed to the explosive growth in viewership that we saw this season. With our tremendous partners in streaming and linear broadcasts, we were able to reach audiences in unprecedented ways this year.”

In a normal season, games are played in-person at the NBA 2K League Studio in New York City. This year, due to the COVID-19 pandemic, the entire season transitioned to remote play with players competing from their individual home markets. Viewership options expanded during this time, with audiences able to enjoy the sport online through Twitch and YouTube, internationally via Sportsnet in Canada and on delay both through eGG Network in Southeast Asia and Loco in India, as well as through new broadcast partnerships nationally with ESPN 2 and locally on NBC Sports Washington for the Wizards District Gaming games.

“What we had all season was a great synergy between the incredible talent of our rookies mixed with the patience and wisdom of our veterans and it led us to this moment,” said Patrick Crossan, Team Manager, Wizards District Gaming. “This is life-changing for many of these players. They played with hearts and smarts all season and this is so well-earned by each of them.”

Throughout the sixteen-game regular season, Wizards District Gaming showed an ability to remain calm under tremendous pressure, mount exciting comebacks and show versatility on both offense and defense to earn a 13-3 record. Wizards District Gaming consistently had one of the NBA 2K League’s best defenses throughout the season and a balanced scoring attack offensively. A second half come-from-behind victory against Jazz Gaming in Game 2 of the semifinals of The Turn Tournament was the turning point in the season and kickstarted the team’s momentum heading into the postseason, where they completed 2-0 series sweeps of Kings Guard Gaming in the NBA 2K League Playoff quarterfinals and the undefeated Raptors Uprising GC in the semis to advance to the NBA 2K League Finals. Veteran player Ryan “Dayfri” Conger was named NBA 2K League MVP finalist and Defensive Player of the Year and teammate Jack “JBM” Mascone was named NBA 2K League’s Rookie of the Year finalist.