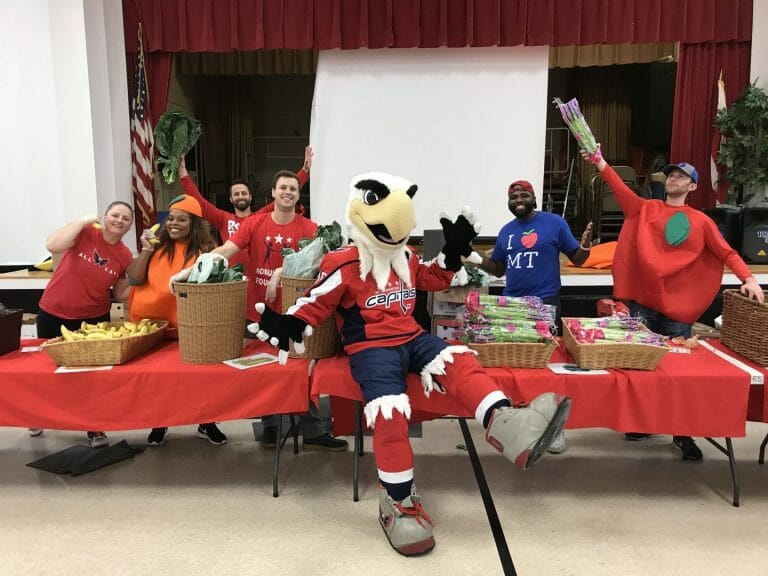 Through the initiative, fans are encouraged to request video messages from the individual personalities through the personalized video shoutout platform Cameo. For a minimum $25 donation, the selected broadcaster will record a personalized video message. Proceeds will benefit DC Central Kitchen, the Capital Area Food Bank and Martha’s Table. Fans can also make a donation to the charities by texting DCSPORTS to 44321.

Capital Area Food Bank
The Capital Area Food Bank works to address hunger today and create brighter futures tomorrow for the nearly half a million people across the region experiencing food insecurity. As the anchor in the area’s hunger relief infrastructure, the food bank provides over 30 million meals to people in need each year by supplying food to 450+ nonprofit organizations, including Martha’s Table, SOME – So Others Might Eat, DC Central Kitchen, Food for Others, Manna, and others. Through these partnerships, the food bank supports 10 percent of the region’s mothers, fathers, sons, daughters, sisters, brothers, and grandparents. To learn more, visit: capitalareafoodbank.org, or find the Capital Area Food Bank on Facebook at facebook.com/CapitalAreaFoodBank, and Twitter at @foodbankmetrodc.

DC Central Kitchen
DC Central Kitchen (DCCK) is an iconic nonprofit and social enterprise that combats hunger and poverty through job training and job creation. The organization provides hands-on culinary job training for individuals facing high barriers to employment while creating living wage jobs and bringing nutritious, dignified food where it is most needed. DCCK’s social ventures include serving scratch-cooked farm-to-school meals in DC schools, delivering fresh, affordable produce to corner stores in neighborhoods without supermarkets, and operating a fast-casual cafe. DCCK has been featured in national media including The Washington Post, The Atlantic, National Geographic, PBS NewsHour, and more. To learn more, visit www.dccentralkitchen.org or follow @dccentralkitchen on Instagram.

Martha’s Table
Martha’s Table believes every child, regardless of zip code, should have the opportunity to thrive and realize their greatest success in life. For the past 40 years in the District of Columbia, Martha’s Table has supported strong children, strong families and strong communities by increasing access to high-quality education, nutritious food and family supports. Through their Joyful Food Markets, Martha’s Table brings the joy of healthy eating to more than 50 elementary schools in D.C.’s Wards 7 and 8 every month. Martha’s Table has long relied on the generosity and passion of volunteers—and they have more than 18,000 volunteer opportunities to fill each year. Now, during this difficult time, Martha’s Table is doubling down on its mission and continues to stand alongside DC residents with an unprecedented level of support, including increased access to meal sites and grocery distribution. For more information on their response efforts and program updates, visit: https://marthastable.org/covid19/.