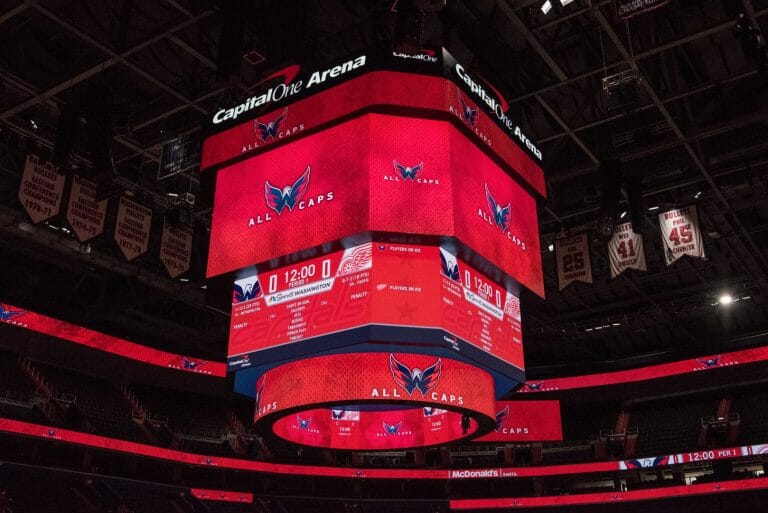 Monumental Sports & Entertainment has announced the completion of the second phase of renovations and cutting-edge upgrades to the fan experience at Capital One Arena as part of an additional $30 million renovation investment in the venue.  The entirely privately-funded project complemented the $40 million renovation at the arena the summer of 2018.

Capital One Arena has utilized the latest in LED video technology to completely transform the in-arena experience and bring fans closer than ever to all the action. The commitment to best-in-class LED displays began with Phase I Renovations which updated more than 350 arena network television screens, 85 98-inch screens, 50 55-inch screens and 23 large format LED boards around the concourse, allowing fans to experience the best of sports technology as they enjoy one of the premier arenas in the country.

What They’re Saying About Phase II of Renovations at Capital One Arena:

“With this latest round of renovations and upgrades at Capital One Arena, we have raised the game once again in terms of best-in-class arena experience for sports and entertainment. Features such as one of the largest 360-degree continuous screen in sports and access to live action, stats and betting lines via dual-vision corner boards and the 9,000 square foot SkyRing make Capital One Arena one of the top digitally-integrated venues in the world.”

“Investing in the best technology available to provide fans with a superior in-venue experience is incredibly important to us at Monumental. From a business perspective, the massive LED capabilities at Capital One Arena will provide our partners with unprecedented ability to reach fans through innovative content.”

“An essential piece of the puzzle towards an ultimate fan experience at Capital One Arena was to create a web of digital media, where fan engagement and interactivity grab the eye of every visitor. Colosseo’s unique innovations in centerhung video board design and LED SkyRing are setting a bar in applied technologies for sports and entertainment venues of the future. Colosseo is proud to assist Capital One Arena in becoming the most advanced venue in regards to the capabilities of applied technologies.

Explore the upgrades at capitalonearenarenovation.com.

Monumental and Aramark also announced enhancements to the food and beverage experience at Capital One Arena, which include the addition of Founding Spirits, Logan’s Sausage Company, and Ben’s Chili Bowl.

Founding Spirits – farmer-owned, DC-born spirits company – creates award-winning spirits that are mindfully sourced from American farmers and distilled in the heart of Washington, DC. Located around the corner at Farmers & Distillers and led by Jon Arroyo and Bob Vanlancker, Founding Spirits invites thoughtful drinkers in DC and beyond to know their distiller and enjoy handcrafted vodka, gin, whiskey, and amaro.

Logan’s Sausage Company is a specialty maker of fine sausage in the DC metropolitan area and has been doing so for over 28 years. Fans will enjoy a wide variety of Chorizo, along with truly authentic recipes for Italian, Kielbasa, Andouille, Bratwurst and more.

What They’re Saying About Enhancements to the Food and Beverage Experience at Capital One Arena:

“We’re excited to unveil Capital One Arena’s latest food and beverage offerings, including new concepts and more local partnerships, to complement last year’s upgrades and renovations. As part of Monumental Sports & Entertainment’s transformation of the overall arena experience, we look forward to welcoming visitors and having them enjoy this newly elevated dining experience.”

“In collaboration with our partners at Aramark, we worked hard to elevate our world-class fan experience at Capital One Arena by upgrading concession stands and providing even more exciting dining options at the venue. Fans will enjoy the wide array of food and drink options as well as innovative improvements to help limit time spent in the concourses and increase time in their seats watching games and shows.”

“A top-notch dining experience is essential to delivering a first-class fan experience. Through the use of innovation in stands such as The Exchange, enhancements to destination lounges, and the addition of D.C. staples such as Ben’s Chili Bowl, Logan’s Sausage Company and Founding Spirits, we continue to set the bar for in-arena culinary excellence.”

Other new menu item highlights include:

Monumental Sports & Entertainment (MSE), located in Washington, D.C., is one of the largest integrated sports and entertainment companies in the country with one of the most diverse partnership groups in all of sports. MSE owns and operates five professional sports teams: NBA’s Washington Wizards, NBA G League’s Capital City Go-Go, NBA 2K League’s Wizards District Gaming, the 2018 NHL Stanley Cup Champion Washington Capitals and the 2019 WNBA champion Washington Mystics. The company is also co-owner of aXiomatic, which has controlling interest in global esports franchise Team Liquid, and owns and operates Capital One Arena in Washington, D.C. Monumental Sports & Entertainment also manages MedStar Capitals Iceplex, the state-of-the-art training facility for the Capitals and EagleBank Arena on George Mason University’s campus. In conjunction with the District of Columbia and Events DC, MSE is a partner in a new sports and entertainment facility in Southeast DC on the St. Elizabeth’s East campus that opened in September 2018.  Facility highlights include MedStar Wizards Performance Center, the brand-new training facility for the Wizards, Go-Go and Mystics, and a 4,200-seat arena which will serve as the new home of the Mystics and Go-Go. Monumental Sports & Entertainment also co-owns and operates Monumental Sports Network (MSN) with the NBC Sports Group. MSN is the mid-Atlantic