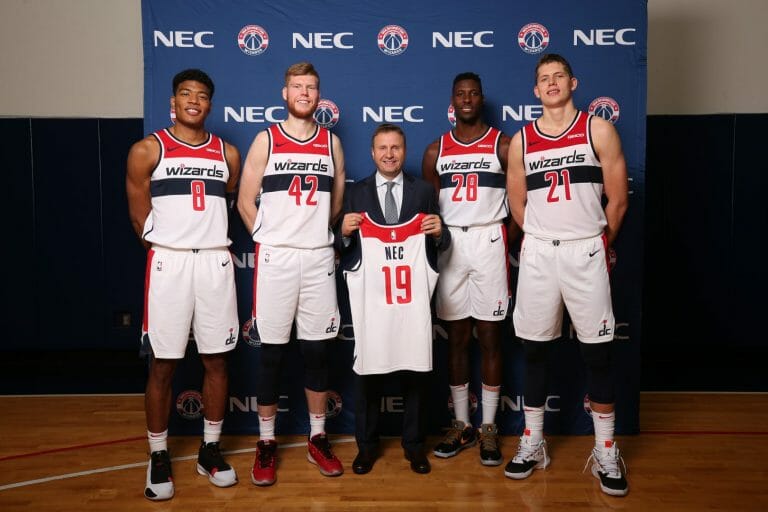 As part of this groundbreaking partnership, NEC will have integration into Wizards elements with a key focus towards reaching fans in Japan including global rights to Wizards marks, and inclusion into the recently announced Wizards Japanese website and Wizards Japanese podcast.

“We are thrilled to announce this landmark international partnership with NEC and the Washington Wizards,” Jim Van Stone, President of Business Operations and Chief Commercial Officer at Monumental Sports & Entertainment, said. “This partnership is a testimonial of the substantial growth of the Wizards fanbase and brand recognition globally, specifically in Japan. NEC has been a pioneer and a leader in the information and communications technology realm for 120 years and we couldn’t be more excited to partner with them.”

“NEC looks forward to building a strong relationship with the Washington Wizards through this groundbreaking marketing program. The NBA is a truly global brand that brings excitement to loyal fans all over the world and NEC is proud to be supporting a team competing at the highest level of world basketball,” said Makoto Enomoto, Chief Marketing Officer of NEC Corporation.

NEC will have messaging within broadcasts as well as digital and social media and TV-visible signage. The partnership will also have compelling hospitality features, including sweepstakes opportunities for NEC customers and experiential events such as viewing team practice, pre-game shootaround and Wizards meet and greets.

“The NEC Group has a terrific reputation as a global organization focused on solutions-based technologies and as we continue to bring fans unforgettable experiences powered by innovation, this is an ideal fit as our first international partner for the Wizards,” Raul Fernandez, Vice Chairman at Monumental Sports & Entertainment, said. “At Monumental, we remain committed to growing our reach globally through unique content, impactful partnerships and by staying on the cusp of advancements in the realm of technology.”

In April, the NBA announced the launch of an international marketing program allowing teams to sell international sponsorship rights beginning with the 2019-20 season.

Monumental Sports & Entertainment (MSE), located in Washington, D.C., is one of the largest integrated sports and entertainment companies in the country with one of the most diverse partnership groups in all of sports. MSE owns and operates seven professional sports teams: the 2019 WNBA Champion Washington Mystics, 2018 NHL Stanley Cup Champion Washington Capitals, Arena Football League’s (AFL) 2018 ArenaBowl Champion Washington Valor and the AFL’s Baltimore Brigade, NBA’s Washington Wizards, NBA G League’s Capital City Go-Go and NBA 2K League’s Wizards District Gaming. The company is also co-owner of aXiomatic, which has controlling interest in global esports franchise Team Liquid, and owns and operates Capital One Arena in Washington, D.C. Monumental Sports & Entertainment also manages MedStar Capitals Iceplex, the state-of-the-art training facility for the Capitals and EagleBank Arena on George Mason University’s campus. In conjunction with the District of Columbia and Events DC, MSE is a partner in a new sports and entertainment facility in Southeast DC on the St. Elizabeth’s East campus that opened in September 2018. Facility highlights include MedStar Wizards Performance Center, the brand-new training facility for the Wizards, Go-Go and Mystics, and a 4,200-seat arena which will serve as the new home of the Mystics and Go-Go. Monumental Sports & Entertainment also co-owns and operates Monumental Sports Network (MSN) with the NBC Sports Group. MSN is the mid-Atlantic region’s top destination for exclusive fan experiences and original sports content across desktop, tablet, mobile and OTT streaming devices. Visit www.monumentalsports.com.

NEC Corporation is a leader in the integration of IT and network technologies that benefit businesses and people around the world. The NEC Group globally provides “Solutions for Society” that promote the safety, security, efficiency and equality of society. Under the company’s corporate message of “Orchestrating a brighter world,” NEC aims to help solve a wide range of challenging issues and to create new social value for the changing world of tomorrow. For more information, visit NEC at https://www.nec.com.