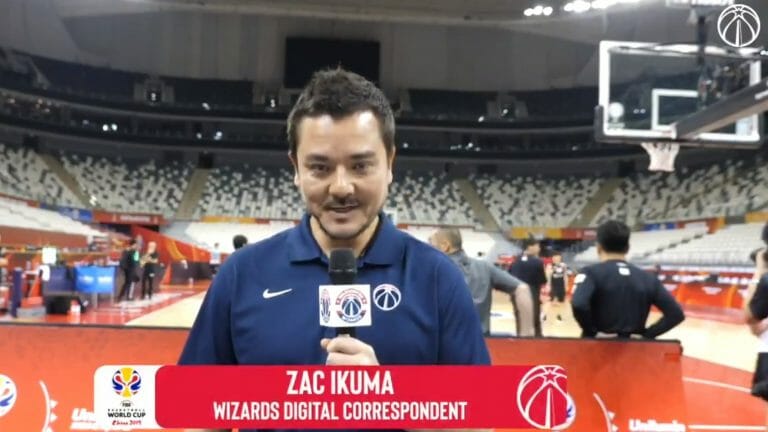 The Washington Wizards have announced the addition of Zac Ikuma as the team’s Japanese Digital Correspondent, the first role of its kind in the NBA. Ikuma will spearhead the organization’s ongoing efforts to increase the team’s global presence with a specific focus in Japan.

Ikuma is fluent in English and Japanese and joins the group with experience as a bilingual sportscaster.  He has spent the past 14 years as a TV reporter, including the last seven years as a play-by-play announcer for Japan’s Nippon Professional Baseball League.  Ikuma most recently covered the FIBA games in China and has experience with Major League Baseball and the National Football League.

“We are excited for Zac to join our Wizards family and help extend our reach in Japan and throughout the globe,” said Jim Van Stone, President of Business Operations for Monumental Sports. “His storytelling expertise will help bring great Wizards content to our fans worldwide.”

Ikuma will host the Wizards Global Podcast in Japanese (ウィザーズ グローバル ポッドキャスト！). Guests will include Wizards players, coaches and front office staff, pillars in the Japanese business community, and much more. The podcast can be found on SoundCloud, iTunes, Stitcher, and Google Play.

In addition to the podcast, Ikuma will be the host of a Wizards player video content series in Japanese called Wizards Players’ Diaries (ウィザーズ密着24／7), with features on the players off the court, traveling, practicing, attending community events and more. Zac will use his broadcast talents on game days with pre and post-game insight and analysis.

The Wizards are also launching a Japanese-language specific website. The site will feature translated content from the writers of WashingtonWizards.com, as well as originally produced content from Ikuma.

The podcast, player video series and website will all launch next week in conjunction with the start of Wizards Training Camp presented by MedStar Health.

For more information about DC 12 Club full season ticket memberships, please call or text the Wizards Ticket Sales office at (202) 661-5050 or email ticketsales@washwizards.com.  Information on Wizards 2019-20 partial plans and individual game tickets will be announced at a later date.  Please visit WashingtonWizards.com for information on how to get early access to tickets prior to the general public.

Monumental Sports & Entertainment (MSE), located in Washington, DC, is one of the largest integrated sports and entertainment companies in the country with one of the most diverse partnership groups in all of sports. MSE owns and operates five professional sports teams: the NBA’s Washington Wizards, NBA G League’s Capital City Go-Go, NBA 2K League’s Wizards District Gaming, the 2018 NHL Stanley Cup Champion Washington Capitals and the WNBA’s Washington Mystics. The company is one of the principal investors in the Arena Football League (AFL) and also operates the 2018 ArenaBowl Champion Washington Valor and the AFL’s Baltimore Brigade. The company is also co-owner of aXiomatic, which has controlling interest in global esports franchise Team Liquid, and owns and operates Capital One Arena in Washington, DC. MSE also manages MedStar Capitals Iceplex, the state-of-the-art training facility for the Capitals and EagleBank Arena on George Mason University’s campus. In conjunction with the District of Columbia and Events DC, MSE worked to establish the new Entertainment and Sports Arena in Southeast DC on the St. Elizabeths East campus that opened in September 2018.  The Entertainment and Sports Arena is the home of the MedStar Wizards Performance Center, the state-of-the-art training facility for the Wizards, Go-Go and Mystics, and a 4,200-seat arena which serves as the new home of the Mystics and Go-Go. MSE also co-owns and operates Monumental Sports Network (MSN) with the NBC Sports Group. MSN is the mid-Atlantic region’s top destination for exclusive fan experiences and original sports content across desktop, tablet, mobile and OTT streaming devices. For more information, visit www.monumentalsports.com.