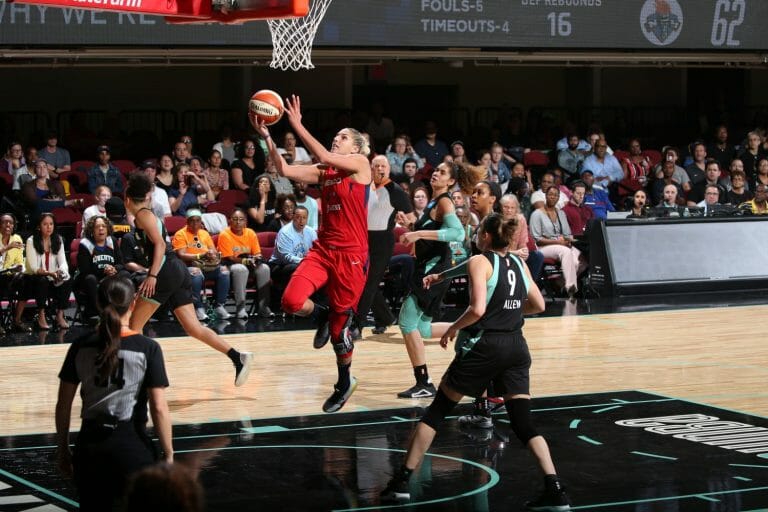 Forward is First Player to Earn Award with Two Teams

The WNBA announced today that Washington Mystics Forward Elena Delle Donne was named the 2019 WNBA Most Valuable Player. It is the second MVP recognition of Delle Donne’s career, making her the first player to earn the award with multiple teams.  Delle Donne received 41 of 43 first-place votes and a total of 420 points from a national panel of sportswriters and broadcasters.

“I would like to thank my teammates and coaches and our wonderful fans–I have the greatest teammates in the world, our coaches have put us in a position to succeed by forming this awesome unit and the energy of our fans has given us the best home court atmosphere in the league,” said Delle Donne. “Everyone has had a part in this, especially my wife and family, and it took a lot of hard work and focus from all of us together to get to this point.  I am extremely proud of this honor, but we still have work ahead of us and we’re all focused playing our hardest to bring a championship to Washington.”

Delle Donne led the Mystics to a franchise record and league-best 26-8 mark, including a 26-5 record with her in the starting lineup.  Already one of the most decorated players in WNBA history,  she had a career year that saw her become the first WNBA player to join the exclusive 50/40/90 club, where she shot 51.5% from the field,  43%  from the three-point line and a league-high 97.4% from the free throw line.  Overall, Delle Donne averaged 19.5 points, 8.3 rebounds and 2.2 assists en route to her sixth All-Star nod and helped the Mystics achieve several franchise and WNBA records.  The team set marks for highest points per game average in franchise history (89.3), highest free throw percentage in a season in WNBA history (87.5) and most assists per game (21.9) in WNBA history.

“We are proud of Elena for the way she has led the team both on and off the court to establish the Mystics as a part of the Ward 8 community,” said Monumental Sports & Entertainment Chairman and CEO Ted Leonsis.  “Seeing the connection that she has built with her teammates, coaches and our fans has been incredibly rewarding. Most importantly, we are honored that she considers Washington and our Monumental Sports & Entertainment family her home.”

Washington acquired the 6’5 Delle Donne prior to the 2017 season.  The 2015 WNBA MVP (while with the Chicago Sky) has averaged 20.3 points, 7.0 rebounds and 1.8 assists per game during her seven-year career and has made six playoff appearances, including trips to the WNBA Finals in 2014 and 2018.  Delle Donne was originally selected by Chicago with the second overall pick as a member of the heralded 2013 WNBA draft class.

The WNBA’s Washington Mystics are owned and operated by Monumental Sports & Entertainment, which is one of the largest integrated sports and entertainment companies in the country with one of the most diverse partnership groups in all of sports. Including the Mystics, MSE owns and operates seven professional sports teams: the 2018 Arena Football League champion Washington Valor, AFL’s Baltimore Brigade, NBA’s Washington Wizards, NBA G League’s Capital City Go-Go, NBA 2K League’s Wizards District Gaming and the 2018 NHL Stanley Cup Champion Washington Capitals. The company is also co-owner of aXiomatic, which has controlling interest in global esports franchise Team Liquid, and owns and operates Capital One Arena in Washington, D.C. Monumental Sports & Entertainment also manages MedStar Capitals Iceplex, the state-of-the-art training facility for the Capitals and EagleBank Arena on George Mason University’s campus. In conjunction with the District of Columbia and Events DC, MSE is a partner in a new sports and entertainment facility in Southeast DC on the St. Elizabeth’s East campus that opened in September 2018. Facility highlights include MedStar Wizards Performance Center, the brand-new training facility for the Wizards, Go-Go and Mystics, and a 4,200-seat arena which will serve as the new home of the Mystics and Go-Go. Monumental Sports & Entertainment also co-owns and operates Monumental Sports Network (MSN) with the NBC Sports Group. MSN is the mid-Atlantic region’s top destination for exclusive fan experiences and original sports content across desktop, tablet, mobile and OTT streaming devices. Visit www.monumentalsports.com.