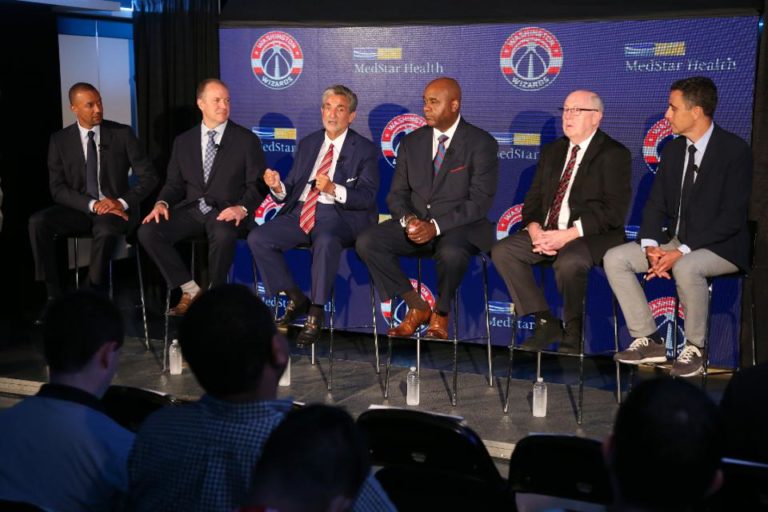 “We have formed a new leadership team with a forward-thinking structure to adapt to the ‘new NBA’ that requires every possible strategic advantage to compete and win,” said Leonsis. “We are building a leadership brain trust with deep Wizards/NBA experience and with sports professionals from inside and outside the NBA to challenge our thinking and adapt to an ever-increasing competitive environment.”

Sheppard will lead strategy, analytics, player personnel, scouting and coaching for the Wizards, Go-Go and District Gaming while Brown and Medina will lead teams providing shared services to all Monumental Basketball franchises. Brown will manage efforts relating to technology, finance, communications, security, research and player engagement and Medina will head up medical, training, mental health, strength and conditioning, nutrition and physical therapy/recovery. Mike Thibault will continue to lead all basketball activities for the Mystics as head coach/general manager while Pops Mensah-Bonsu will continue as general manager for the Go-Go, reporting to Sheppard.

As part of the new organizational structure, Leonsis also announced a new athlete development & engagement department which will be led by former Georgetown and Princeton Head Coach John Thompson III. Thompson will use his vast experience to lead a team that will focus on maximizing player potential both on and off the court for all Monumental Basketball athletes. Employing a holistic development approach, the department will focus on financial literacy, post-playing career opportunities and the overall empowerment and development of the athletes.

Entering his 25th year of service in the NBA and his 17th with the Wizards organization, Sheppard has earned a reputation as one of the league’s most innovative and creative executives. While with the Wizards, his responsibilities have included salary cap management, negotiations, draft preparation, talent evaluation of collegiate athletes and professionals both domestically and abroad, recruitment and evaluation of free agents, statistical evaluation, the hiring of coaches and personnel, and monitoring the Wizards’ efforts in the NBA’s Player Programs.

He has also organized the Wizards’ training camp and preseason schedules, overseen the athletic training, strength training, video, technology and equipment areas for the team and directed in-arena renovations to areas including the Wizards’ locker room, players’ lounge, family lounge and front offices.

Sheppard served as the Nuggets’ Senior Director of Team Services and Player Relations before his arrival in Washington. With Denver, he oversaw all internal and external communications functions and scouted international, high school, collegiate and minor league talent.

An active figure within the United States Olympic Movement for over a decade, Sheppard worked as a press attaché for the three Summer Olympic Games (1996, 2000, 2004), as well as three Olympic Festivals and the 2003 Pan American Games. He assisted with the formation of the Northern European Basketball League (which realigned as part of FIBA Europe) and also serves on the Industry Advisory Council for the American Public University and the American Military University Systems.

A graduate of Harvard Law and Hampton University, Brown is a seasoned NFL executive who has served within both football and business operations.

In 2016, Brown was promoted to executive vice president of football operations for the Cleveland Browns, where he was responsible for developing the organization’s short and long-term visions and strategies in collaboration with the ownership group. He also oversaw Cleveland’s scouting functions and management of the roster and salary cap.

Brown was originally hired by Cleveland in 2013 as executive vice president and general counsel, where he served the franchise in both football and business capacities. He was responsible for overseeing the roster and salary cap while also directing the team’s football administration functions, including negotiation of players contracts. On the business side, his duties included insurance and risk management, licensing and intellectual property issues and litigation management.

Brown started his career as an attorney at Wilmer, Cutler, Pickering, Hale and Dorr in Washington, DC, where he represented clients in a variety of transactions including venture capital and private equity deals as well as mergers and acquisitions. He joined the Jacksonville Jaguars in 2005 where he served as senior vice president and general counsel, working on both the football and business side of the franchise’s operations.

Daniel Medina comes to Washington having spent the last two seasons as the vice president of athlete care for the Philadelphia 76ers. In his role with the 76ers, Dr. Medina oversaw all areas of athlete care and performance, including the medical and sports science departments, as well as the athletic training, physiotherapy, nutrition and strength and conditioning departments.

Prior to Philadelphia, Dr. Medina spent over a decade with Fútbol Club Barcelona. Dr. Medina finished his tenure with the team as deputy director of the sports science and medical department, where he managed 2,000 athletes and more than 125 athlete care and performance staff members.

Dr. Medina served as team physician for FC Barcelona from 2008-2015 and first joined its medical services department in 2005. He also served as a driving force behind FC Barcelona’s award-winning Barca Innovation Hub. Dr. Medina was heavily involved in Barca Innovation Hub’s evaluation and research of emerging products, particularly those designed to aid in athlete health and performance.

Thompson arrived at Georgetown with a unique pedigree as the son of one Hall of Fame coach and the student of another, having played basketball for the legendary coach Pete Carril as an undergraduate at Princeton University. He achieved several coaching milestones, including an NCAA Final Four appearance, two NCAA Sweet-16 appearances, three Big East regular season championships and one Big East tournament championship. In his four years as head coach at Princeton, Thompson won three Ivy League championships. Overall, he owns a stellar 346-193 (.641) all-time record and was named Big East Coach of the Year (2013), NABC Coach of the Year (2007) and was a two-time recipient of the Black Coaches Association (BCA) Male Coach of the Year.

Following his tenure at Georgetown, Thompson continued his path as a stalwart in basketball, serving as an analyst for ESPN and an assistant coach for the USA Men’s National Team (where he assisted head coach Jeff Van Gundy as the team qualified for the 2019 FIBA World Cup). He also served on the Commission on College Basketball (established by the NCAA Board of Governors, Division I Board of Directors and the NCAA president and chaired by former Secretary of State Condoleezza Rice to fully examine critical aspects of Division I men’s basketball) and was the recipient of the 2019 Guardians of the Game Award for Service, presented by the National Association of Basketball Coaches (NABC).

Off the court, Thompson has been an active member of his community. His greatest contribution was establishing the John Thompson III Foundation in 2007 to create a positive and lasting impact on the city he cherishes, Washington, DC. He currently he serves on the boards of his alma mater, Gonzaga College High School, the NABC and the non-profit, Men Against Breast Cancer.

Entering her 18th season in the Washington Wizards organization, Sashia Jones has established the organization as a pillar of philanthropy in the DC metropolitan community.

Under her leadership as vice president of community relations, the team has established signature events such as Salute to the Stars, Family to Family, the Special Olympics Unified game and the Thanksgiving Day Assist which have all been recognized as best practices in the NBA.

Jones has also implemented programs and initiatives for Wizards All-Stars John Wall and Bradley Beal that have led to each winning the NBA’s Community Assist Season-long award. This award is given to an NBA player who best reflects the passion that the league and its players share for giving back to their communities. In addition to established community events, Jones has partnered the organization with numerous social and charitable organizations throughout the DC metropolitan area, including Make-a-Wish which helps fulfill the wishes of children experiencing health challenges, and Bright Beginnings Inc., which assists children experiencing homelessness with opportunities to receive educational assistance and special experiences during every holiday season.

Brett Greenberg is in his 10th season with the Wizards, recently completing his third as vice president of basketball analytics/salary cap management. In his role, Greenberg leads the Wizards’ analytical efforts while assisting with all salary cap and Collective Bargaining Agreement matters.

Prior to his promotion, Greenberg served as basketball operations assistant/video coordinator for the team for two seasons, where he played a vital role in the coaching staff’s preparation by providing video breakdowns of opposing teams and individual players as well as video analysis of the individual strengths and weaknesses of Wizards players. He served as basketball operations assistant/technology during his first two seasons with the organization.

Greenberg came to Washington after spending the 2008-09 season in the basketball operations department for the Miami Heat as a video intern. Prior to working for the Heat, he served as a student manager and assistant video coordinator for four years for the Duke men’s basketball team from 2004-08. Greenberg graduated from Duke University in 2008 with a degree in Sociology.

A native of Owings Mills, Maryland, Greenberg graduated from McDonogh School in 2004. While in high school, he worked for the men’s basketball team at Stevenson University (formerly Villa Julie College) for two seasons.